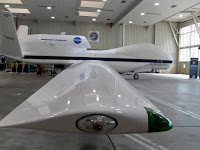 Spent a fascinating day at NASA's Dryden Flight Research Center at Edwards Airforce Base. Saw the Global Hawk drone - an unmanned aircraft that's capable of flying half way around the world in a single flight at 60,000 ft. Cool science - gathering info about climate and weather. The Hawk's 2nd scientific flight is currently in progress - due to land in the morning and wil break record for longest flight of its kind (24 hours).

They had their differences but Johnny Rotten has paid a warm tribute
to his former manager, Malcolm McLaren.

"For me Malc was always entertaining, and I hope you remember that.
Above all else he was an entertainer and i will miss him, and so
should you," said John Lydon, in a statement.

Lydon, who is busy preparing for a comeback tour with Public Image Ltd
this month, has declined interview requests. I gather he is keeping a
hectic schedule these days, rehearsing in Hollywood.

McLaren died earlier today. He was 64 and had been treated for cancer.

No comments:
Email ThisBlogThis!Share to TwitterShare to FacebookShare to Pinterest

The earth is certainly have a good old rumble this East Sunday afternoon. A 6.9 quake in Baja Mexico was felt across Southern California, including downtown LA. But I was blissfully unaware in Santa Clarita. Within minutes of the Mexico quake several others were reported around CA - including a 4.1 in northern CA. So far, no reports of significant damage or casualties.

Update 19:26 PT: 7.2 quake (updated) was biggest in region for almost 20 years (since 1992). It was felt by an estimated 20 million people from Mexico to California, Nevada and Arizona. 1 person is reported to have died in a collapsed building in Mexico.

Also on this:
Western Mexico hit by 7.2 earthquake
Earthquake history
No comments:
Email ThisBlogThis!Share to TwitterShare to FacebookShare to Pinterest

California is overdue for a big one. A really big one. The end of the San Andreas fault was not experienced a major rupture for at least 250 years. The San Andreas fault runs for roughly 1287km (800 miles) through western and southern California in the US. It marks the meeting point of the Pacific and North American tectonic plates. The two plates either side of the San Andreas fault are moving past each other at a rate of about 25mm each year - the fault's "slip rate." If all the strain was released at once, it would have enough energy to unleash a magnitude-8 earthquake - roughly the size of the devastating 1906 quake in San Francisco. Quakes are predicted to occur on the southern part of the fault every 200-300 years.

July 29, 2008: 11:42 am: 5.4 Chino Hills Earthquake, the greater Los Angeles metropolitan area experienced its largest earthquake in years as a magnitude 5.4 event occurred 8.5 miles beneath the Chino Hills. This earthquake was felt across much of southern California, and as far away as Las Vegas, Nevada. I was at a movie memorabilia auiction preview at the time and filming!

April 18, 1906: 7.8 - One of the greatest earthquakes ever to hit California. Damage was extensive in San Francisco, and was increased perhaps tenfold by raging fires. Total damage was estimated at over $500 million. Seven hundred people died. The earthquake occurred on a blind thrust fault, and produced the strongest ground motions ever instrumentally recorded in an urban setting in North America. Damage was wide-spread, sections of major freeways collapsed, parking structures and office buildings collapsed, and numerous apartment buildings suffered irreparable damage.
No comments:
Email ThisBlogThis!Share to TwitterShare to FacebookShare to Pinterest

"Thankfully, he died as he lived his life... with dignity and grace,
after a year-long struggle with cancer" - a statement from the family
of TV legend John Forsythe. The actor has died at the age of 92, from complications of pneumonia following a long battle with cancer. He was famous for playing Blake Carrington on Dynasty - but I'm hearing less well known as the disembodied voice of Charlie - giving the angels their next mission. RIP.
No comments:
Email ThisBlogThis!Share to TwitterShare to FacebookShare to Pinterest

Conrad Murray "hanging on by a thread"

With court appearance No. 2, due next Monday (April 5), Michael Jackson's doctor is apparently "hanging on by a thread," financially. In court papers Dr Conrad Murray's lawyers say he must be allowed to continue practicing medicine in order to pay for his defense on a manslaughter charge.

Murray's lawyers argue that his "ability to pay for his own defense depends almost entirely on his ability to continue to treat patients."

On Monday a date for Murray's preliminary hearing is likely to be selected and a judge assigned to the case.

Nine months after his death a Facebook campaign has emerged to try to get Michael Jackson's name reinstated over a school auditorium. MJ attended Gardner Street Elementary School and subsequently donated money to it when he was a rising star. In 1989, he attended a ceremony with unveiling of Michael Jackson Auditorium, named in his honor. But when the signer faced child molestation charges, his name was covered up with a wooden sign which simply reads 'auditorium.' Jackson was found not guilty on all counts at his trial in 2005.  Now his supporters feel the name should be reinstated and have started a Facebook group, encouraging fans to download a letter to sign and send to the school district superintendent. The group has over 2,100 supporters.