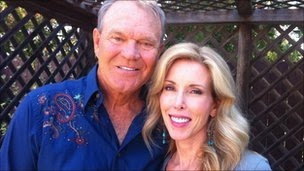 In 2011, shortly after Glen Campbell revealed that he was suffering from Alzheimer's disease, we spent the day together - at Glen's Malibu home, the golf course and his home studio. Glen and his wife Kim talked honestly and with humor about the disease.

I also met Glen's children, Cal and Ashley and bandmate Siggy Sjursen, as they performed together in their Agoura Hills garage studio. We were all in awe of Glen's incredible fortitude and enduring talent as he performed some of his most familiar songs. It was one of those goosebump moments, never to be forgotten.

Update:
October 7, 2011: I went to see Glen Campbell on the Los Angeles leg of his 'Goodbye' tour last night, at Club Nokia. It was a magical evening - touching, inspiring and only a little sad. Campbell, despite his memory fading through developing Alzheimer's disease, clearly relished every moment. I lost count of the number of times he said, 'I love this song,' smiling and responding to the crowd's roaring cheers of approval. The showman shone through, even during a few nervous moments when he became hopelessly lost mid-verse. His band, made up of his children, kept him going and Glen laughed it off. Some of his guitar riffs - and his performance of the classic, Wichita Lineman - were flawless. It was more than a concert, it was a lesson in how to deal with life and all that it throws at you.