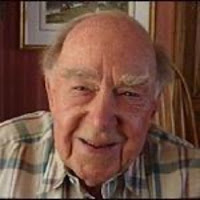 The film-maker Ronald Neame, one of the longest survivors from the early days of British cinema, has died in Los Angeles. He was 99.

The director of the hugely successful 1972 action adventure The Poseidon Adventure enjoyed a career that spanned eight decades. He worked with many of the 20th Century's most distinguished film-makers and performers, including Alfred Hitchcock, Noel Coward, Alec Guinness, John Mills, Maggie Smith and David Lean.
During the final decade of his life, Ronnie and I became friends. We chatted for hours as he reflected on his colourful career and longevity.
He had a deep affection for his craft, a keen sense of humour and a unique perspective on the early days of film-making.
Ronald Neame was born in London in 1911. The son of a celebrated photographer, Elwin Neame, and the actress Ivy Close, he was destined for a career in entertainment.

He was a fine director. I got on with him particularly well. For some reason or other he took a liking to this pimply-faced young man

He began as a clapper boy on Hitchcock's Blackmail, the first talking picture made in England, in 1929.
"I was only 17 so I was in awe of him," said Ronnie, of Hitchcock.
"He was a fine director. I got on with him particularly well. For some reason or other he took a liking to this pimply-faced young man."
Ronald Neame went on to become a producer and eventually a director, and is best known for The Poseidon Adventure. The film, about an ocean liner overturned by a freak wave, starred Gene Hackman, Ernest Borgnine and Shelley Winters.

It was slated by the critics but the picture was a major box office success and developed a cult following. When Poseidon, the big budget, special effects-laden remake was released in 1996, Ronnie accompanied me to a early screening of the film in Hollywood.
He was keen to slip into the cinema unnoticed.
He did not want to steal the limelight from the director, Wolfgang Peterson. When the credits finally finished rolling, Ronnie remarked: "I was absolutely convinced he would make ours look like a whole lot of codswallop."
But he need not have worried. The original Poseidon Adventure stood the test of time, and dwarfed the remake with its superior character development and raw, suspenseful drama.
Not that Ronnie was overly proud of his epic. Much to his chagrin, the movie, which was hugely profitable, defined a career that was otherwise dominated by art house productions.
"I thought it was just an ordinary, run of the mill action picture," he said.
"Poseidon was an astonishing success and I still don't really know why.
"The sad thing is that I will be remembered for having directed The Poseidon Adventure and I think that's a great pity because there are four other films that I much preferred. But it is The Poseidon Adventure that will go down in film history as Ronald Neame's disaster," he laughed.
Ronnie believed his best work as a director was on Tunes of Glory, The Horse's Mouth, The Prime of Miss Jean Brodie and Scrooge, the musical with Albert Finney.
Tunes of Glory, his favourite film, starred Alec Guinness and John Mills, in a story about two rival officers in a Scottish military regiment. The actors gave what are widely considered to be two of their finest performances.
Maggie Smith won an Oscar for her performance in The Prime of Miss Jean Brodie.

As a producer, he was proud of Great Expectations, Brief Encounter and Oliver Twist, all directed by his longtime collaborator and friend, David Lean.
Neame, who was nominated three times for an Oscar, was a founding member of the British Film Academy and he was made a CBE in 1996. In the same year he was given a Bafta Lifetime Fellowship Award.
"I find the whole aging process frustrating," he once told me.
"It's a mixed pleasure having all your marbles."

It annoyed Ronnie that with age he was becoming less mobile and that he had to give up his lifelong practice of enjoying a few drinks.
"When people ask about the secret to longevity I say the honest answer is two large vodkas at lunchtime and three larges scotches in the evening.
"All my doctors have said to me, 'Ronnie, if you would drink a little less, you'd live a lot longer.' And they are all dead, and I'm still here at 95."
Ronnie was always extraordinarily good company and active until the final weeks of his life. He enjoyed nothing more than reminiscing about the old days but he said he did not miss being on set.
"I was making films during the golden years, and they were the golden years. We made the films in the way we wanted to film them. We had a benevolent boss in Arthur Rank - Uncle Arthur we used to call him.
"I've had a wonderful innings, a great innings."
Email ThisBlogThis!Share to TwitterShare to FacebookShare to Pinterest
Newer Post Older Post Home